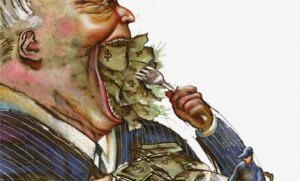 Is the financial sector being led down the path of destruction as myths and legends beat their chests and spew deception and misleading information.  The TBTF banks and the financial sector have been in an uptrend while the treasury markets continue to move lower – bond prices down, bond yields up and borrowing costs higher.

I mention again that many banks are flooding the consumer credit card market with “interest free” money for up to 14 months.  I fear the percentage of takers of the offers will be substantially higher than the percentage of folks who will actually receive the interest free benefit by paying off a balance within the 14-month period.  I’ll go out on a limb and say that all of these deals are skewed much heavier in favor of the banks than the consumer.  It appears that the market is factoring this in to share price and the trade is leaning towards the full side.   A key take away is that most of the increases in earnings have come from the financial sector.  I would say much of these reported earnings might be unsustainable and no longer real.

As a result of the FED holding yields at historic lows banks of all sizes have been able to participate in borrowing large amounts of very cheap money and in turn have placed much of the cheap money to work via the long side of the stock market.

It is time to be leery of the perceived smart money letting the market know their position crap.  There’s a trade that got pushed to the limit very quickly and not a word from the position holder or the underlying company.  These types of “hype” moves are becoming more frequent or more noticed thanks to the usage of social media.  I fully expect this trend to continue in both directions.

So much of the status quo remains in place due to conventional wisdom theory.  To be fair the theory has stood the test of time – no doubt.  But as the status quo continues to build momentum in changing direction it will eventually create more losses resulting in an increase in bankruptcies and defaults.  Continuing to bet on the availability of cheap money would not be a good long-term bet.

The era of cheap money is unwinding, with the FED laying the framework of where their “stops” are and what the triggers are, the time factor is not as skewed.  I look at the FED comments as letting us all know when they will begin to turn seller.  The financial sector will not be able to escape unless they start ahead of time or hedge their bets with unsuspectingly unreal numbers.  Expect some nasty “hits” within the financial sector. 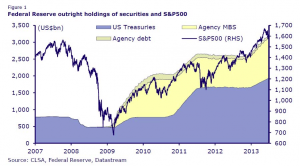 The positions held by the FED are huge folks – do not be fooled into accepting anything being quoted to you in trillions of dollars – the great unwind may be in the offing.

“JPMorgan Chase & Co., a financial holding company incorporated under Delaware law in 1968, is a leading global financial services firm and one of the largest banking institutions in the United States of America (“U.S.”), with operations worldwide. The Firm had $2.4 trillion in assets and $209.2 billion in stockholders’ equity as of June 30, 2013. The Firm is a leader in investment banking, financial services for consumers and small businesses, commercial banking, financial transaction processing, asset management and private equity. Under the J.P. Morgan and Chase brands, the Firm serves millions of customers in the U.S. and many of the world’s most prominent corporate, institutional and government clients.” – source www.sec.gov

The advance in JPM has been many things – straight up – wouldn’t be one of them, although, portions of the advance(s) may have felt parabolic.  The chart below (20+ year Monthly) includes my preferred EW count: As in most of the broader indexes, JPM remains in the process of completing a larger 5-wave advance.  Within that process, wave 4 ended in October of 2011 as from that low the stock has been tracing out a 5th wave advance.  Currently, JPM has also began to trace out a corrective pattern off of the recent highs.  I anticipate that JPM, BAC, GS, WFC, and C will lead their larger broader indexes with the corrections still underway. 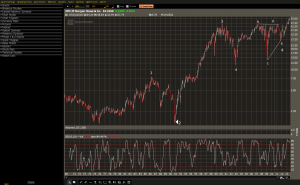 The shorter-term chart below includes Fibonacci retracement/support levels for the correction.

As in the broader indexes expectations remain for JPM to move to additional new highs over the mid-term.