Successful trading has as much to do with timing as anything else. You can have all the best tools at your disposal, but that won’t help you much if you miss the move of the day. Most markets will make only one significant move in a session. Occasionally you will see a smaller secondary move before the end of the day, but that is rare. It is important to recognize when you might have missed the move of the day and resign yourself to that fact. Failure to do so might cause you to chase less promising trades which are likely to turn into losers.

The chart of the NASDAQ below illustrates a good example of the “Move of the Day” trading rule. The stock indices confined themselves to making one right move during the day and then remained relatively range-bound for the rest of the session.

Notice how the market became Flat after the big run up. If you missed the initial move, you would have been wise to turn off your computer and head to the golf course instead. Attempting to “force” the market to give you a profitable trade after a big move like this would likely have undesirable results. 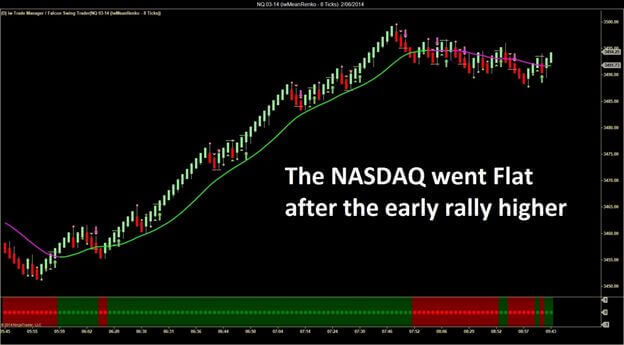 As obvious as this seems I see novice traders all the time trying to make the market give them something it is not prepared to give (or has given but they didn’t take it). Traders like this tend to equate trading with Work. When you Work, you get paid for what you do. The more you do, the more you earn.

But trading is not like that. When you trade you can do all the Work and still not have anything to show for your effort, or worse, you could even lose money for all your hard Work!

As a trader, the number one trading rule to remember is to take what the market is giving – no more, no less. This responsibility means there will be times when the market is not giving, so you cannot take. Other times you will be late, and the market has already given, but you were not there to take. Regardless, you need to remind yourself that you cannot pressure the market into giving you a profitable trade. Tomorrow is another day. The only thing worse than missing a big market move is trying to make up for it by taking iffy trades out of desperation. That is a formula for losing money.

“I’d rather be out of the market wishing I was in, than in the market wishing I was out” (Anonymous) is a quote that hangs on my office wall. It reminds me that there will be times when I miss the Move du Jour, but there’s no point in chasing it, once it’s done. It’s a trading rule all traders must learn if they are to be successful. Unfortunately, some never do. Will you?

See this trading rule and others in our Trade Room.  Click HERE to Register.