Can you Predict the Market as a Responsive Trader? 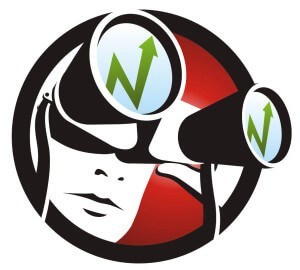 What’s the difference between a Weatherman and a Trader?

I asked this question in a private user group a little while ago and stumped quite a few people. Do you know the difference? On the surface, they seem the same, but there is a significant difference between the two. The main difference between a Weatherman and a Trader is that the Weatherman tries to predict what will happen next, whereas a good Trader responds to what is going on. A subtle difference, but understanding that difference can make, or cost you, a lot of money.

This phenomenon, in fact, was the inspiration for designing our Trade Forecaster product.

Case in point: the morning of October 4th, 2012 the December mini-Dow (YM) made a very aggressive run-up. The advance was so quick that most traders didn’t have a chance to get into the trade until it was over – most traders but not all traders. Traders who are used to responding to the market saw the advance building nearly 30 minutes before the breakout came! So while all the Weatherman traders were busy trying to short the market, responsive Traders were becoming suspicious of their short positions and maybe even cautiously bullish.

Take a look at this chart. 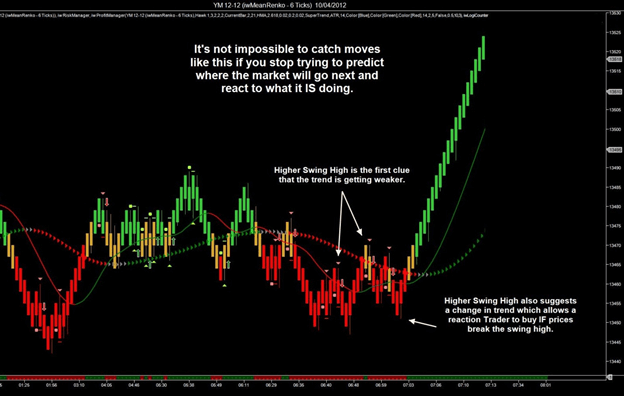 See how the Dow continues to push lower just after the open? But did you also notice that during one of these moves lower the market made a new short-term swing high? This condition should not happen in a reasonably strong bear move and upon seeing the new swing high, responsive Traders start to question whether or not the Bears are still in control of the market?

Notice too, how the next move lower, after that new swing high, also made a higher swing low! Even novice traders know that markets make higher lows in uptrends, not downtrends. At this point, responsive Traders implement a plan to BUY the market IF the last swing high fails because they know THAT IF the trend is indeed changing THEN the lows will hold, and the highs will yield.

The ensuing breakout above the swing high was textbook, and the Dow quickly rallied to 13500 where Weatherman traders once again attempted to SELL, only to be overrun by the Bulls in a similar sequence to the one that started the move up (which can be seen in a shorter timeframe).

The easiest way to make the market “prove you right” is to use Stop-Market orders to enter a trade. Stop-Market orders only trigger IF/WHEN a particular price is hit. IF the price is not hit THEN, the trade is never filled. Weatherman traders, on the other hand, love limit orders as they try to pick where the market will turn. The problem with entering trades with limit orders like this is that the market hasn’t shown you what it wants to do yet and as a result, you could end up taking loss after loss after loss before you finally get it right.

Instead, forget to try to predict the market; rather concentrate on what the market is doing now and formulate a strategy from there. You’ll know you’re on the right track when you start thinking regarding “IF the market does this THEN I’ll do THAT.” IF you learn to do THIS, THEN you can leave the prediction business to the Weatherman and THAT will put more money in your account.