What Brad Pitt Taught Me About Trading 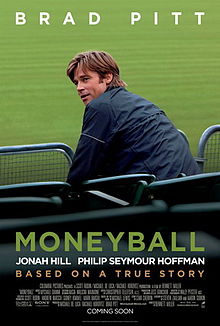 Moneyball (2011) is a bio-sports-movie about Billy Beane, played by Brad Pitt, the manager of the Oakland A’s baseball team and his struggles to put together a competent team while working with a severely limited budget. The movie is well done and worth watching (even if you’re not a baseball fan), but it’s the subject of the film that I think is relevant to traders.

If you’ve seen the movie, you know that Beane (Pitt) attempts to resolve the problem of finding quality players by leaving the old school scouting model and embracing a new philosophy. Through his new criteria, he picks up “budget” players which other teams have overlooked, but he hopes will perform well on the field.

Without giving away the movie, I’ll tell you that the focus of player selection comes down to finding players who are consistently able to get on base. Get on base and you have a chance to score. This analogy perfectly describes what traders need to do to become profitable as well.

While it is fun to hit “home run” trades, they are rare, especially for the average trader (and baseball player for that matter). It is much easier, and more profitable in the long run, for a trader to take high probability trades to “hit singles”. This approach means making fewer trades, using tighter profit targets, going all-in/all-out and banking profit when you have it.

Compare this with what most traders do. Most traders think that More Trading = More Money, but this is rarely the case. Most traders would do better if they limited the number of trades they took per day and instead focused on making quality high probability trades over quantity of trades.

How many trades should you take? Flip a coin. I’m serious. Get a coin and flip it and see how many times you toss Heads in a row. That’s how many times you should trade in a day. Anything more than that and you’re inviting a loser to take away your hard earned profit.

Same thing with profit targets. Forget risk/reward ratios. They don’t work. Instead, focus on the probability of hitting your target. Most Professional Traders scalp trade for $50. Doesn’t sound like much, does it? But what the Pro knows is that big profits aren’t about finding more trades; rather it’s about maximizing the potential high probability trades when you get them.

Whether you’re trying to score “runs” in baseball games or profits from high probability trades, the math doesn’t lie. Winning is a numbers game. Now use the numbers to your advantage.

See our high probability trades in our Trade Room and see why we would make Brad proud.  😉  Click HERE to Register.